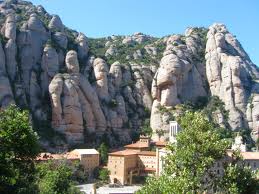 According to Catholic tradition, the statue of the Black Virgin of Montserrat was carved by St. Luke around 50 AD and brought to Spain. It was later hidden from the Moors in a cave (Santa Cova, the Holy Grotto), where it was rediscovered in 880 AD.

According to the legend of the discovery, which was first recorded in the 13th century, the statue was discovered by shepherds. They saw a bright light and heard heavenly music that eventually led them to the grotto and the statue.

The Monastery of Montserrat, located near the top of the 4,000-foot mountain, is home to about 80 monks. The monks welcome visitors and invite them to participate in their daily celebrations of Mass and recitations of the Liturgy of the Hours.

The Basilica, next to the monastery, is home to the revered La Moreneta, or Black Virgin. To visit the statue, enter the church through a side door to the right.

The statue of the Virgin, known in Spanish as La Moreneta, is a small Romanesque statue made of wood. It depicts a seated Black Virgin with the child Jesus on her lap. Her dark color is due to changes in the varnish with the passage of time.

HOW to get to Montserrat from Barcelona centre

The best and most exciting way to go is via the Catalán railway, Ferrocarrils de la Generalitat de Catalunya (Manresa line), with 12 trains a day leaving from the Plaça d’Espanya in Barcelona. First train at 8.36 a.m. Line R5.