Spain is getting prepaired for the visit of the Pope!

See how the Sagrada Familia will look in 2026, when completed. Very interesting video

On the first day of the trip to Spain on Saturday the 6th of November 2010, the pope will visit Santiago de Compostela, the northern Spanish city that became an important pilgrim destination in the Middle Ages.

In the afternoon of the 6th the Pope is due to arrive at the airport El Prat de Llobregat from where he will go to the residence of the Cardinal for the night. On Sunday the 7th of November the Pope Benedict XVI will depart  in his Pope mobile from the Barcelona Cathedral to go to the most famous church of the Holy Family, or better known as the Sagrada Familia, where a Mass in partly Catalan, Spanish and Latin will start at 10am.

Big tv screens and chairs are installed in the surroundings of the Sagrada Familia, the route which the Pope Benedict XVI will follow is clean and ready to pass and thousands of people from abroad are arriving at rented apartments in Barcelona.

Pope Benedict XVI is due in Barcelona  on Sunday 7th November 2010 to perform
the opening ceremony on the Expiatory Church of the Holy Family (La Sagrada Familia.). The Pope gave to the church the honorary title of Basilica. Title given to important churches.

The Sagrada familia is not a cathedral. The Cathedral of Barcelona is in the old centre,  it is the Cathedral de la Seu.

Groups of gays and lesbians have planned on kissing 2 minutes in front of the old cathedral when the pope will start his way to the Sagrada Familia. It has been initiated on the blog “Queer Kissing Flashmob”.  It is strange that a such a nice thing as a kiss can get seen as a revolutionary act ! This is a kissing act “anti -papa”, a kiss of love and freedom.  Video from the Kissing in front of the cathedral.

Barcelona is known as Spain’s most progressive, vibrant and tolerant city and the pontiff’s visit sparked outrage from some groups. Around 200 gays and lesbians staged their five minute-long “kiss-in” as the Popemobile drove past the crowds.

“We are here to demonstrate against the pope’s visit and call for a change in the mentality of the Catholic institution which still opposes our right to different ways of loving,” said one protester, Sergi Diaz.
One huge banner read: “We women don’t want you. Keep your rosaries off our ovaries.”

Other groups do not agree with the Pope arrival :  “Yo no te espero ” do they say which means “I do not expect you “. AIDS help group will dance.

If you are not one of the invited people to pray with the pope at the Sagrada Familia or later in the afternoon at the blessing of the first stone for a new home for children with Down Syndrome and other disabilities you might be able to get a glimpse of the Pope when he take the following route in his Pope mobile.

It is possible to buy entrance tickets in one of the Caixa bank terminal. Avoid queue. 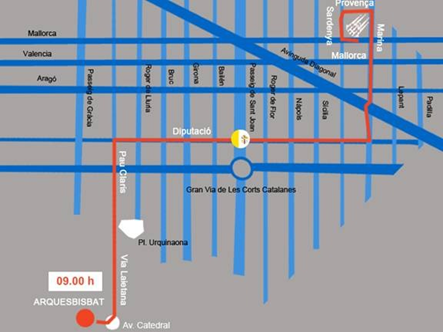