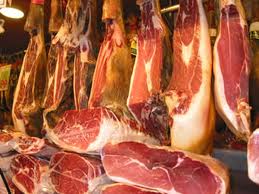 Jamon Serrano is the delectable cured Spanish ham that any visitor to Spain is sure to have encountered at one time or another. In many bars you will see these serrano hams hanging from the ceiling and also displayed prominently on a special stand known as a jamonera in the perfect position for cutting. This in itself is something of an art as jamon serrano is never cut with a machine but always with a knife and the exact thickness is of great importance.

“Serrano” means “from the mountains”. The ham has this name because its origins lie in the mountains and in the time before refrigerators the slow process of air curing was one of the best ways to preserve your meat. 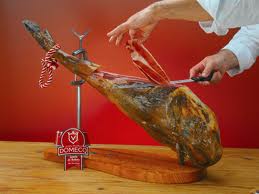 To make a serrano ham you take a nice fat pig’s leg, rub it with salt and hang it in a cool, airey place. Traditionally the making of jamon Serrano sometimes also known as jamon iberico, would start in the autumn after the slaughtering of the pigs once the weather had cooled down. They are then hung out to dry in a place where there is minimal water but where the wind can get at them. The curing process is finished by the summer by which time the ham will have lost about a third of it’s weight. The longer the ham is cured the better the flavor and in fact it continues curing until it’s finally eaten.

Pata Negra.
A pata Negra is the ham most correctly termed jamon iberico as these Spanish hams come from the Iberian pig, a black pig descended from the wild boar. They were once the predominant race in Spain but are not so common today, being mainly found in Andalucia, and their hams are highly prized.

Iberian piglets are fed on a diet of cereals and acorns until they are nearly 18 months old. The three last months of their lives are spent out in the Dehesa during what’s known as the montanera, a period from October 1 to January 1 when acorns fall from the oaks. The pigs must feed on enough acorns and reach the DO-specified weight of 160 kg to gain the title Jamón Ibérico de Bellota. The regulations also specify that there should be no more than two pigs per hectare of land to ensure that each pig can eat the required amount of between 6 and 7kg of acorns a day.

The acorns of this area are rich in oleic acid, the same chemical which can be found in olives. The flavour finds its way into the fat of the animal, so much so that the locals refer to Iberian pigs as “olives with legs”.

There are many producers of Spanish hams but the level of quality can be judged by the following:

The finest jamón ibérico is called jamón ibérico de bellota (acorn). This ham is from free-range pigs that roam oak forests (called la dehesa) along the border between Spain and Portugal, and eat acorns during this last period. It is also known as Jamón Iberico de Montanera. The exercise and the diet has a significant impact on the flavor of the meat; the ham is cured for 36 months.

The term “pata negra” refers to the color of the pig’s nails which are white in the traditional pork  but black for the Black Iberian Pig.