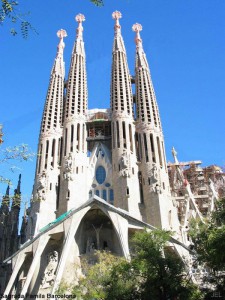 See how the Sagrada Familia will look in 2026, when completed. Very interesting video

Pope Benedict XVI came in Barcelona  on Sunday 7th November 2010 to perform the opening ceremony on the Expiatory Church of the Holy Family (La Sagrada Familia.). The Queen and spanish King Juan Carlos, their son and princess Letizia did attend the ceremony.
The previous day he will be in Santigao de Compostela in Galicia.

The Sagrada Familia has never been a cathedral. Barcelona’s cathedral is the one in the gotic area , called La Seu. The church was named after Barcelona’s patron saint Eulalia. Its official name – Catedral de la Santa Creu i Santa Eulalia – is Catalan for Cathedral of the Holy Cross and Saint Eulalia. The commonly used name La Seu refers to the status of the church as the seat of the diocese.

La Sagrada Família is under construction since 1882 and it should get finished by 2040. Its real name is the Expiatory Temple of the Sagrada Familia. Gaudi was very religious.
Architect Gaudi (1852-1926) devoted much of his life to working on the building. At the time of his death only the Nativity Facade with one tower and the crypt were complete.
Today visiting the building is visiting a construction site, the admission fees are paying for the building of the church.

The church as designed will have 18 towers, four on each facade, symbolising the 12 apostles and a massive central tower (560 feet high) over the nave crossing symbolising Christ. The other 5 towers will symbolise the 4 evangelists and the Virgin Mary. The three major facades will depict : the Nativity, the Passion and the Glory of Christ. The building will be three hundred and ten feet long by hundred and ninety seven feet wide. Finished it will seat 13,000 people.

When the church is finished, it will have 18 towers: 12 dedicated to the apostles, 4 to the evangelists, one to Jesus and another to Mary.

As for his entire work, Gaudi had taken much of his inspiration from nature : there are giant turtles supporting the columns on the Nativity Facade, and giant shells on the apse.

The work has continued over the years leaving the building with different colours and different sculptural treatments. The work on the Passion Facade started in 1954, and the nave was roofed over in 2000. The interior of the church is breathtaking in its size and design.

Since 2003, the catholic church is considering Gaudi becoming a Holy Saint .

Definitely worth a visit!

Entrance door , called the Passion. Below, the inside of the cathedral 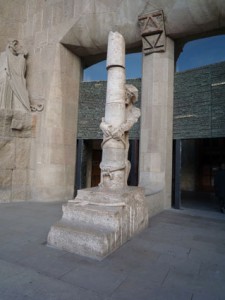 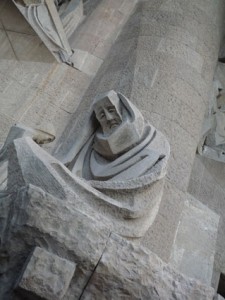 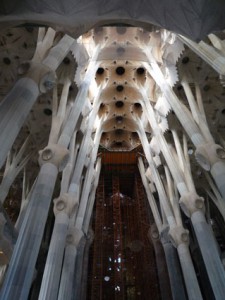 SAGRADA FAMILIA: How to avoid the queue to buy your ticket