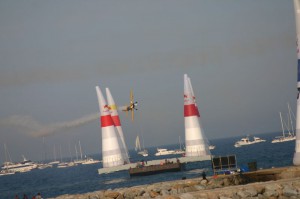 The Grand Finale of the 2009 Red Bull Air Race World Championship takes place in Barcelona on 3rd and 4th October. Britain’s Paul Bonhomme currently with 55 points and Hannes Arch of Austria with 51 points will be contending for the title of World Champion 2009.

For the third consecutive year, SEAT will be honored to sponsor the Red Bull Air Race, “Formula 1 air.” In addition to the visible elements that make up the race, such as inflatable pylons and doors, among others, SEAT will also provide 75 cars to facilitate transportation to the participants of the races, the drivers and team members of the Red Bull Air Race During the events, most notably the car “Follow Me”, which guides planes landing on the runway.