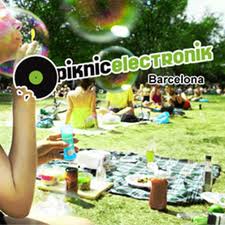 Where  : Montjuic hill ,  Jardins de Joan Brossa which was a former amusement park.

How to get there : Metro Parallel, cable car (funicular)  up to Monjuic hill. Free parking for those coming by car.

The cable car starting from the beach area, the Barceloneta, gets to Monjuic Hill where the festival is setting on.

Price 11 €/day or 55€ for the season.  Free for children under 12 years old.
September 24th big event during La Merce festival in Barcelona.
Conceived in Montreal, Piknic Electronik is a bucolic and idealistic twist on the outdoor techno all-dayer, with the emphasis on family-friendliness. Now celebrating its tenth year of events in Montreal and having expanded to the nearby city of Gatineau, Piknic Electronik has gone international for the first time with this, the first of seven events at Jardins de Joan Brossa, in the shadow of the cable cars on Barcelona’s beautiful Montjuic hill lovely Jardins de Joan Brossa park which was a former amusement park.

Piknic Electronik has organised similar events in Montreal, Canada for 10 years. They chooses Barcelona as their first European venue.

There is an area for kids, with an inflatable castle, swings … all kind of amusement for them.

Area for families with children. You can bring your own food, Non alcoholic beverages are allowed (50 cl). There will have a big choice of all kind of food to buy inside the park.

Who is coming from Canada :

You can book an apartment near Monjuic area for your stay in Barcelona. The area Parallel is a very lively area, at walking distance from the main interesting spots.
The most famous park in Barcelona is the one from Gaudi, the Güell Park , it is above the city.
The Ciutadella park is in the centre of Barcelona, near the Born area.