The Güell Park is not in the centre of Barcelona but up the hill of Carmel. It is up the Gracia area. It is worth going up there …
If you buy a ticket with the Tourist bus, it will drive you up there. Spend at least one hour in the park.
The Güell Park is a World Heritage by UNESCO
Address : North of the Eixample
Metro :  Lesseps then you have to walk up the hill 1,5 km

Metro Station Joanic ( Yellow Line 4) and then, take the mini bus 116  in the street Escorial n° 20, it will drive you up to the main entrance of the park Güell.
During the week, there is a minibus every 10 minutes, on week ends, every 20 minutes

It is possible to visit Gaudi’s house and see how it was decorated. Entrance fee.

New June 2010 :  The guard’s house becomes a museum. The MUHBA is the museum of the history of Barcelona.  The first exhibition “Güell, Gaudi y Barcelona” will explain the relation between Gaudi and the business man Güell.

Spending a few days in the city, it is nice to rent apartments in Barcelona. 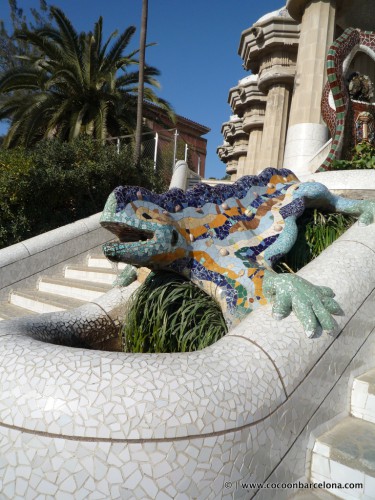 Video with the Güell Park

Eusebi Güell (Gaudi’s boss) wished to develop a garden city with around fifty houses and asked Gaudi to work on the project. They managed to lay out the park in 14 years, and built only two houses before interest in the project stopped for lack of money !
It is now a fabulous city park. The two gateway houses with their eccentric roofs were built for the park’s guardians. The  main structure is the forest of columns which support a viewing platform over the city. Beneath the platform, the columned area was to be a covered market for the residents. The sound is very good and quite often musicians play there. The park contains amazing stone structures, the  dragon (it is not a dragon but a salamander) fountain that is at the entrance to Guell park, is adorned with beautiful colours and there is something rather hypnotic and magical about it.

There is a beautiful view of Barcelona when you sit on the beautiful colorfull bench with multi-coloured tiled mosaic seats. You can walk around the park and admire how Gaudi was inspired by nature.

SAGRADA FAMILIA: How to avoid the queue to buy your ticket