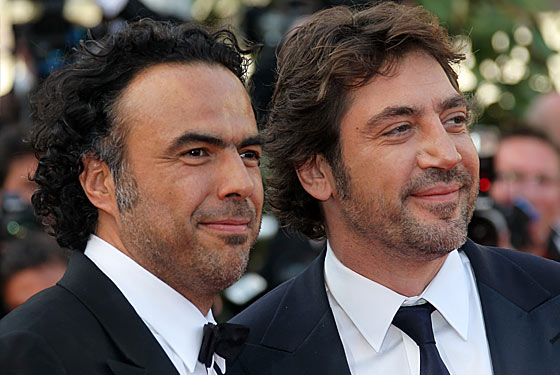 Iñarrittu with Bardem, who won the price as best actor at the Festival of Cannes, 2010.

After the success of Woody Allen’s movie ” Vicky, Christina, Barcelona”, many movie makers  plan on recording a movie in Barcelona. Iñarrittu, the famous mexican movie maker of ” Babel” has done it already.

The film stars Javier Bardem as a man involved in the illegal sweatshop underworld of Barcelona who is trying to support his children but is ultimately forced to confront the morality of his situation.

Everyone seems to agree that the film’s only name star, Bardem, gives an extraordinary performance and that Biutiful‘s best chance for crossover success is building buzz around it. Asked about Oscar, Iñárritu gave us his best pitch: “Few actors have this quality of physical strength and presence combined with a fragile, spiritual poetic sensitivity,” he raved. “That combination makes it a very appealing thing — that contradictory nature. You can’t learn that. You either have it or you don’t have it.” Iñárritu isn’t shy: “I think it’s one of the best performances ever — a tour de force in which there’s not a second that is not honest or true.” The director admitted that they had already considered the possibility of an Oscar — and that Bardem could make history with his Spanish-speaking role. “I hope that language will not be in the middle of an award,” said Iñárritu. “I think language is just a formality, and should not be considered when you’re recognizing the work of somebody. I think it will be exciting to see that because there will be broken barriers. Language is the first one we have to break.”