read carefully your flight ticket to know which terminal your plane is leaving from. There are 2  terminals :  the T1 and the T2. 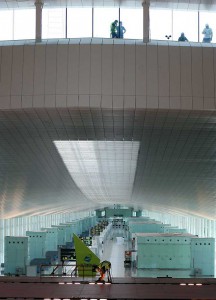 Instead of staying at a hotel, check appartment Barcelone for an alternative accomodation.

If you want to let your luggage in our office, you are welcome to do it during our office opening hours.
Monday to Friday from 10 a.m. to 19 p.m.  Metro Jaume or Arc de triomf

To go to the airport from our office :

Bus 14 on the other side of the street from Francia train station. It will drive you to the Plaza Catalunya.

Close by Plaza Catalunya we offer also many appartement a Barcelone.

You can also take the metro at Jaume station to Metro station Urquinaona which is close to Plaza Catalunya.

On the Plaza Catalunya, the Blue airport bus will drive you to the airport. 35 to 40 min drive.

Our appartementen Barcelona can all be easily accessed from the Barcelona airport.