Barcelona would not be Barcelona without the Rambla.

La Rambla from Barcelona is exactly 1.2 kilometres long and nearly everyone who visits Barcelona walks along it. La Rambla was laid out in 1766, following the contours of the medieval city walls that had bounded this part of Barcelona since the 13th century. The locals took it to their hearts straightaway. In Barcelona, a city of narrow, winding streets, the Rambla was the only space where everyone could stroll and spend their leisure time. And we mean everyone. Because of its central location, the Rambla became a meeting place for all the social classes.The name La Rambla is thought to originate from the Arabic “ramla,” meaning “sandy ground.” This was the name of the the waterway where rainwater would flow from the hills of Tibidabo down to the sea after heavy rains. In the 18th century the first buildings started appearing along the Rambla and the transformation into the tree lined avenue began.  Although it is now officially called La Rambla, it actually consists of six ramblas, each with its own name. Perhaps that explains why you will often hear it called Las Ramblas.
6 Ramblas : de Canaletes, dels Estudis, de les Flors, dels Caputxins, de Santa Monica, del Mar.

Watch for your belongings while walking on the Ramblas. Pickpockets are very clever in Barcelona.

The Rambla starts on the Plaza Catalunya and ends at Chrisopher Columbus mirador.Although the Rambla is called “Guirilandia” by locals ( guiri meaning tourists) , I give you 10 good reasons to go down the Ramblas.

1. The street artists, they all wear such nice handmade outfits and will make you laugh or smile. Do not forget to give them some money if you take a picture. They will also move when receiving money.

2.The Canaletes fountain is one of the symbol of Barcelona.The name Canaletes dates back to the 14th century, and refers to the water channels that brought water down from the Collserola Ridge to Barcelona. Later on, in the 18th century, a university known as the Estudis Generals was built on this site and the water jet was used to create a fountain.The fountain is crowned by a streetlamp with four arms. A symbol of the city and a meeting place where many visitors stop every day for a drink of water. Legend says that anyone who drinks from the fountain will fall in love with Barcelona and return to the city time and time again. This is also the part of La Rambla where Barça fans traditionally gather when FC Barcelona win big titles.

3.The Gran Teatre del Liceu : one of the biggest european opera house.

4.The Boqueria market full of colours and life. You can buy typical spanish food, as ham, fish, fruit, vegetables. Enjoy a fresh juice, fresh fruit salad or a lunch in one of the tapas places like the Bar Central.

5.The Palau de la Virreina a cultural centre, where you can enjoy some interesting photography exhibitions. Built in 1770.

6.Plaza de l’os : Miro choosed this place on the Rambla for a mosaic pavement. The mosaic is circular like the cosmos and its basic colours – yellow, blue and red – and simple forms. 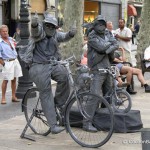 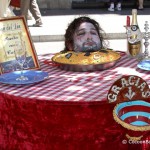 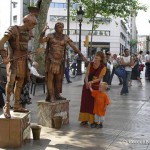 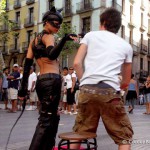 Human statues on the Ramblas 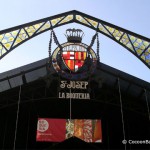 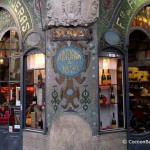 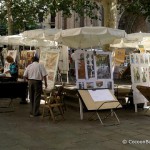 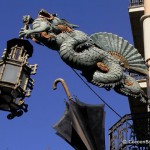