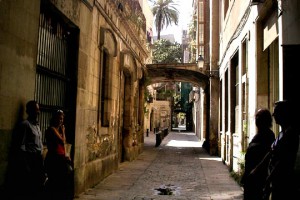 Until the end of the 19th century, the historical centre or Ciutat Vella ( the Gothic area, La Ribera, La Rambla and El Raval) was the city of Barcelona. It is famous for its historic monuments, narrow streets and its bohemian atmosphere. You can walk for hours in its medieval streets wandering how it must have been living in Barcelona with the bourgeois guilds in times when Barcelona was an important trading centre for the whole mediterranean.

The Gothic quarter is the heart of the medieval part of the city which, until the mid 19th century, was contained within the city walls. A walk through its lovely streets brings us to the Cathedral which was built in the 13th century. The outside has finished its refurbishings this year and you can visit the inside of this beautiful church. Nearby, you can find the Plaza del Rei with Gothic buildings which were a part of the Palau Major, the residence of the Catalan monarchs in the 9th century. In one of the buildings you can visit the museum of the history of the city of Barcelona and in summer the square is used for concerts of the Grec Festival.

This area is the historic and political centre of Barcelona. On the Plaza Sant Jaume you can see the town hall and the palace of the Generalitat de Catalunya ( The Catalan Government) both with its Gothic façade and possible to visit on set days.

The Gothic quarter is also the area of el Call, the medieval Jewish quarter including the streets La Palla, Banys Nous, Boqueria and Call. You will find many nice shops in this part of the Gothic area.

If you want to see more of its beauty walk into La Ribera area, this part of the city is also called the Born area. Here you can wander around in the medieval streets of which the most famous one is Calle Montcada. In one of the former palaces which are situated in this beautiful small street you can find the Picasso museum which is worth a visit.
There are many shops of designers in the Born.

La Rambla is a lively and entertaining spectacle. It begins at the Plaza Catalunya and continues down to the Columbus statue in the harbour. Here you can see the human statues which are great ( Don´t forget to give them some money before you take a picture). You can stop at the Boquería market which is the oldest covered market of Barcelona ( you can buy some fresh fruit, fresh juice, fruit salad) or have some churros with chocolate in the Opera Café in front of the Liceu theatre. Churros are made from dough and are small tubes which you can dip in a cup of hot chocolate. It´s a typical spanish breakfast or a perfect ´merienda´ in the afternoon.

On the left side of the Rambla ( looking towards the Plaza Catalunya) you enter in the Raval area. This multicultural area is interesting for it´s museum of modern art MACBA or the museum of contemporary art CCCB. You can enjoy a lunch menu at mid day on the terrace of the C3 bar just behind the CCCB or at one of the terraces next to the MACBA where you can have a tapas menu.

La Rambla – The most famous street in Barcelona