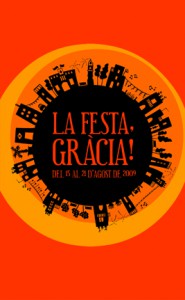 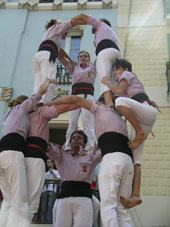 Do not miss this festival event if you are in Barcelona. The Festa Major in Gracia is from August 15th to 21st 2009.

There are many shops where people can drink, eat …  some get drunk of course …

History of the catalan songs : the writer Miquel Pujado will explain all about it on the Plaza Joanic from 5 to 8 p.m.

There is a new area dedicated to magic on plaza del Nord.

Castellers , human towers, each team wears different colours of outfit.
On Saturday at 12 a.m. on Plaza Vila de Gracia. It is worth seeing it ! Young kids, adults, women, men all together they are trying to make the highest tower.

How to get to the Gracia area : Metro Fontana, Joanic.