The Palau Robert presents the exhibition “Ferran Adrià and el Bulli”. Risk, Freedom and Creativity”, which will run from 2 February 2012 to 3 February 2013, showing the talent and comprehensive capacity to innovate that Ferran Adrià, the late 20th and early 21st centuries’ most influential chef, has applied to gastronomy.

Palau Robert
Passeig de Gracia 107
Barcelona’s Palau Robert is an exhibition centre run by the Government of Catalonia. With more than one thousand square metres devoted to its activities, the centre is housed in a neoclassical building at the junction of Avinguda Diagonal and Passeig de Gràcia, two of the most important thoroughfares in the Catalan capital. The building also houses a Tourism Office, where qualified staff provide information about the whole of Catalonia.

The restaurant is definitvely closed on July 30th  2011. But the spirit of El Bulli keeps on going in the new coctails-bar  in Barcelona the ” 41 ° ” and a retaurant “The tickets” on the Parallel Avenue 164  in Barcelona.

The Tickets
Avenidad Parallel 164  Barcelona
Open from 7 pm to 11 pm from Tuesday to Saturday
Only 16 guests can eat at the same time.  Menu : 153 €
Menu : 41 different dishes, it lasts 2 hours and a half
Reservation online 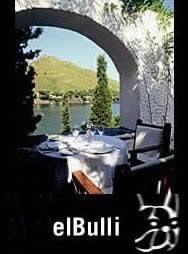 This famous restaurant “El Bulli” is not in Barcelona but on the Costa Brava in Rosas : cala (bay)  Montjoy. It is about 2 hours drive from Barcelona.

It is only open from April to October. Adrià Ferran lives in Barcelona and has his laboratory in the city. During the winter, he spends times trying new recipes or chemical experiences for his molecular gastronomy cuisine.

You have to book a table with a year in advance. It is the Number 1 restaurant in the world, the Michelin guide has given it 3 stars, the Campsa guide has given it 3 suns and the english “Restaurant Magazine” put it again in first place in awards for the World’s Best restaurants for the third time (2006, 2007, 2008).
A cuisine that do not follow the rules, it is a laboratory of the new cuisine. Some friends that have been there can not stop talking about the restaurant and the food. Try your luck!
It could be your best culinary memory.

Gastronomic menu is about 300 €  per head without wine. You cannot book a table until mid-January.

The world’s most famous chef, Spaniard Ferran Adria, yesterday confirmed to the Observer, itwill not reopen as a commercial restaurant after it shuts next year. It is to be transformed into a non profit foundation similar to those that run museums and art centres throughout Spain.

The concept of creating a foundation had flowed from that. “It means the spirit of El Bulli will be even stronger and will live on for ever,” he said. It would also, he said, prove less risky in the long term than running it commercially.

Adrià and his partners had been losing €500,000 a year on the 60-seater restaurant. Their business followed a similar model to those of haute couture fashion houses which lose money on their collections but then make a profit by using their brand to sell anything from perfumes to handbags. Adrià’s brand is on everything from olive oil to crockery and silverware.

Some people say that Adria Ferran uses chemical products in his kitchen, some of those ingredients could be bad for health.

January 2011 Adrià Ferran opened 2 Tapas restaurant with his brother Albert
Cocteleria 41º and the Tickets
avenida Parallel 164,
Open from Tuesday to Saturday from 7 to 11 pm
Sundays from 1 to 3 pm.