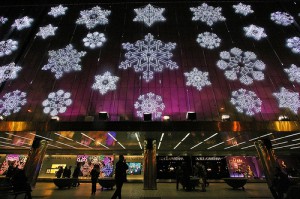 At this time of the year Barcelona has been warmly decorated with many lights in the streets of the city center. The Plaza Catalunya ( especially El Corte Inglés), the Ramblas and Portal de l´Angel are the most wonderful iluminated spots.

In Barcelona Christmas and New Year are celebrated in a quiet atmosphere and most of the time with family or friends. So don´t expect fire works on New Years eve like in many other cities in Europe.

At the Plaza de la Catedral the yearly Santa Llucia fair is a lovely market to visit. Here you will find many Christmas decoration. If you would like to buy a tipical Catalan tradition you have to buy a ´Caganer´.

The caganer is a particular feature of modern Catalan nativity scenes and is often tucked away in a corner of the scene. Originally, the Caganer was portrayed as a Catalan peasant wearing a traditional hat called a barretina — a red stocking hat with a black band, but nowadays you can find many varities of the caganer like celebrities, athletes, Spanish royalty and political persons. Last year Barack Obama and football player Eto were popular as ´poopers´. 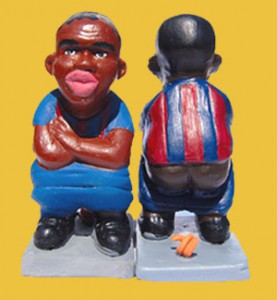 The most important nativity scene, including the caganer, you can see on the Plaza Sant Jaume. The Plaza de Sant Jaume is a beautiful square where you can see the main town hall.

On New Years eve, when the bells ring at 00:00h, it´s a Spanish tradition to eat the 12 grapes for good luck. In cities as Madrid this is celebrated on the Plaza del Sol, but in Barcelona people wish each other a Happy New Year at private parties or at home. If you do want to celebrate the New Year on the streets, the best place to go is the Plaza Catalunya, the central square of Barcelona or visit the Torre Agbar in Glories which will be illuminated in a different colour at each stroke of the clock.

The Poble Espanyol is a favorite place to go out this night.

To have a good year, the tradition says to watch the sunrise on the beach and to start the first day of the new year with churros and chocolate!

Cocoonbarcelona wishes you a Merry Christmas and a Happy New Year!