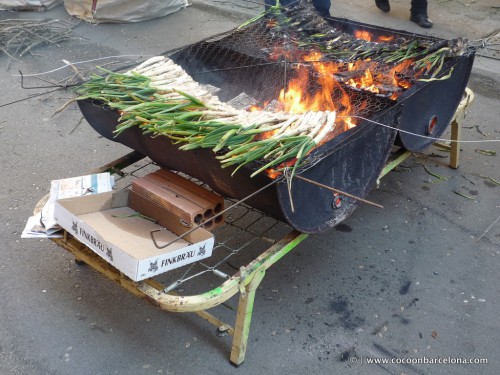 It’s Calçots season once more in Catalonia, which means a couple delicious months of barbecueing green onions in the countryside. You can eat those calçots as tapas in many restaurants.

A calçot is a sort of long green onion which is nice and fat in February and March – so right now! The tradition is to go to a masia, or country farmhouse restaurant where they char these onions by the ton on the BBQ, but you can get them sometimes also in restaurants.

The process of eating is a bit messy as Calçot eaters must first peel the onions (the outer layers are black and burned of the fire) and then dip them in red romesco sauce, which is very delicious and made of red pepers, almonds, tomato, breadcrumbs, parsley, garlic. Once the calçot is peeled, throw your head back and eat the dripping calçot, sword-swallowed style. Drink some wine and repeat. You get to wear a bib to start eating the calçots. 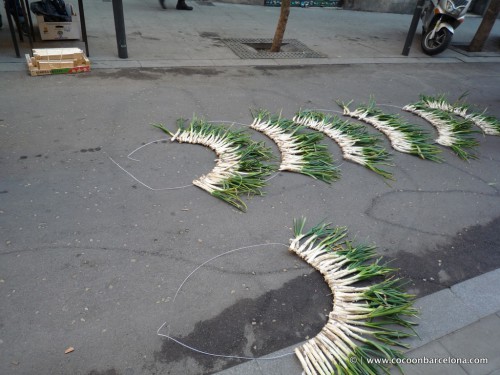 Many restaurants offer the Calçotada : calcots and different types of grilled sausages. The calçots’ season starts late November until March. In the markets, Calçots are sold in bundles of 24 which should be enough for 2 people.

The love for this white scallion reaches its peak on January 31st 2010, in its hometowm Valls, with the Gran Fiesta de la Calçotada, when 30 000 people come to enjoy the calçots. The top players in the Valls – calçots competition can put away over 200 calçots in 45 minutes !

If you want to enjoy a Calçotada in the country side, you can take the FGC from the Plaza Catalunya to Les Planes (20 min ride). Direction Sabadel o Terrassa and stop at Baixador de Vallvidrera.  Font les Planes

In front of the station, there is another restaurant with terrace where to eat Calcots. ” A l’air” 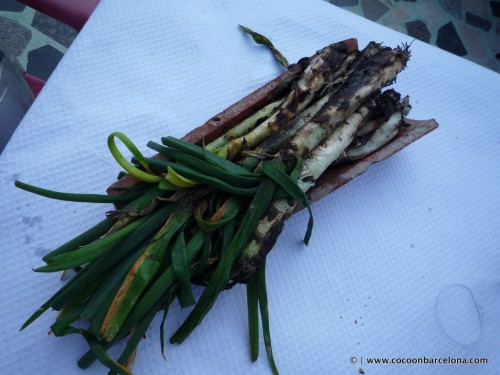 Recipee for the Romesco sauce
ingredients for 4 people:

Discovered by a local farmer called Xat de Benaiges at the end of the 19th century, the cultivation of Calçots is a complicated process that starts at the end of the year when onion seeds are planted. Once the onion has germinated and begun to grow, it is pulled out of the ground and stored for a time before being replanted. It is only buried half way into the earth and as it grows higher, it is necessary to repack earth around the newly grown part of the vegetable. When harvested it has the long leek like appearance that most people living here know and love. The Calçotada became a family feast celebration in the first few decades of the twentieth century. However, it wasn’t until 1983 that Valls undertook the first communal Calçotada to which anyone can go. Other areas in Catalonia produce Calçots but Valls proudly lays claim to its role as founder of the Calçot tradition. 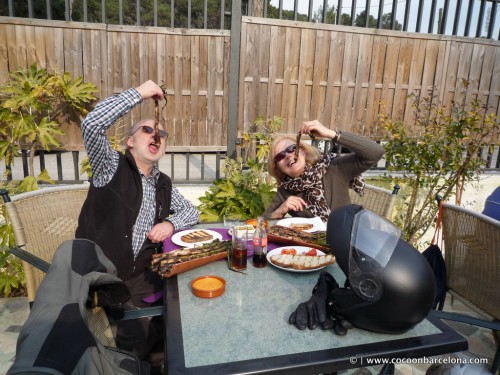