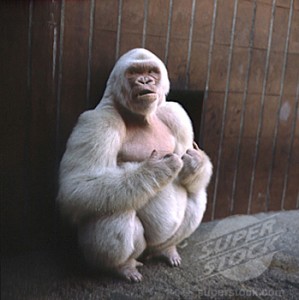 Copito de Nieve-ex-Star of the Zoo

The zoo has a wide variety of animals to see. Lots of monkeys, gorillas,  crocodiles, 2 olifants, zebras, snakes, birds…
The Zoo also has a restaurant, picnic area, a big nice playground,  a shop, electric cars, ponies and a mini-train.

For nearly 40 years an albino gorilla named Snowflake was adored by people around the world.
In 1967, local villagers in Africa’s Equitorial Guinea captured a remarkable baby gorilla. This young male was unlike any gorilla the villagers had seen before; instead of the thick brown fur of most gorillas, this baby had a coat of pure white. Through a series of fortunate circumstances, the rare white gorilla ended up at the Barcelona Zoo, where he became an international star. He was given the Spanish name Copito de Nieve and the English name Snowflake.

Four of Snowflake’s children are still alive : three females, Kena, Machinda, and Virunga, live at the Barcelona Zoo. One male, Bindung, resides at the Fukuoka Zoological Garden in Japan. Nine grandchildren also survive, five of whom are still at the Barcelona Zoo. Snowflake’s last grandchildren were born in August 2004. Two are twins, male and female. This is a remarkable event, since the birth of twins is quite unusual in gorillas. None of Snowflake’s offspring, however, is albino.