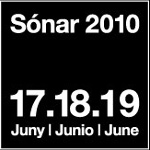 The Sónar festival is one of  Europe’s premier electronic music and audiovisual art festivals and takes place every year in June.

Sónar counts yearly around 80,000 visitors and with this number of visitors you can call it one of the biggest musical events.

You get installation art, audiovisual concerts, and medialab presentations next to DJ sets, electonic music, film and more.  It’s the new media jet set in the heart of Europe.

In 2010  will occur the Sonar event in A Coruña ( northern Galicia), titled Sónar Galacia, on the same days. Together with Xacobeo (Compostela’s Jubilee), the festival takes the Way of Saint James and celebrates both in A Coruña and Barcelona. A double-edition event, the usual Barcelona and this extraordinary one, which will be named Sonar Galicia.

Some of the confirmed artists for Sonar 2010 are Swoon, Chemical Brother, Roxy Music with Brian Ferry! … For the complete overview and tickets you can enter the Sonar 2010 Festival

There is also a Sonar for Kids. Musical workshops,  Joan Miquel Oliver, The Pinker Selector.

The Sonar by Night takes place in a large conference centre called Fira Gran Via, in the outskirts of the city. You can get there by bus : Sonar provides what they call ‘uninterrupted buses’ to and from the venue on Friday and Saturday night, from 20:30 – 08:00. These run from Plaça de las Drassanes (at the bottom of the Ramblas) and drop you at the entrance to the festival. It lasts untill 8 am.

The train station that is closest to Sonar by Night is called ‘Europa/Fira’. It can be reached via all trains leaving the FGC station that is located in the Espanya metro station. The journey lasts only 5 minutes and trains run at least four times every hour. The Sonar by Night venue is just around the corner from the train station and signposts will lead you directly to it.

Trains from Plaza Espanya run until approximately 00:00 and trains from Europa/Fira start running again at 05:10.