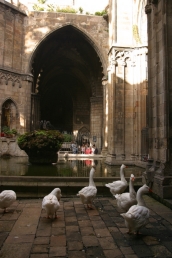 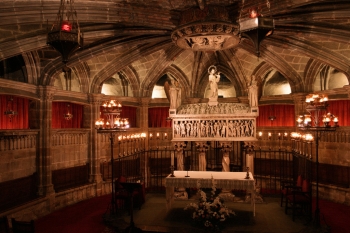 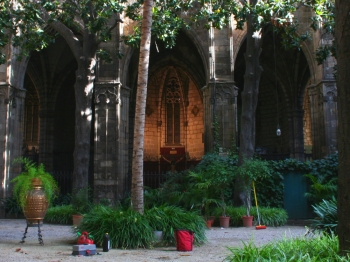 No everybody likes to visit a church, but this one is special with its cloister and the 13 geese !

The church was named after Barcelona’s patron saint Eulalia. The commonly used name La Seu refers to the status of the church as the seat of the diocese.

Already in 343 A.D. during the Roman Empire a basilica was built at the site of the current cathedral. In 985 the basilica was destroyed by the Moors. It was replaced by a Roman cathedral, built between 1046 and 1058.  A Roman chapel, the Capella de Santa Llucia, was added between 1257 and 1268.  It was later incorporated in the cloister next to the cathedral.

30 Years later, in 1298, construction of the gothic cathedral started under King Jaume II, known as ‘the Just’.  It took until 1460 before the main building was completed. The gothic facade was finished much later, in 1889 and the last part, the central spire, was completed in 1913. The design of both the facade and the spire were based on the original design from 1408 by  the French architect Charles Galters.

The church is 93m/305ft long and 40m wide. The octagonal clock towers reach a height of more than 50m. They were built between 1386 and 1393. The spire of the central tower reaches a height of 70m or 230ft.
The interior consists of one wide nave with 28 side chapels. The crypt contains the sarcophagus of Santa Eulalia. The cathedral also has a beautifully carved choir. An elevator in the northeast of the cathedral brings you to the cathedral’s roof.

Adjacent to the cathedral is a 14th century cloister. There are always 13 geese in its central courtyard. Each goose represents one year in the life of the martyr Santa Eulalia, a young girl tortured to death in the 4th century by the Romans for her religion.  The cloister overlooks a beautiful garden filled with orange trees, palm trees and a pond with fish.

At Christmas time, the market of Santa Lucia is just in front of the cathedral.

Every Sunday, normally at 12:00 pm, a group of locals meet in front of the cathedral to dance the Sardana, which is the traditional dance of Catalonia, while band members play on the front steps.  The dance is not nearly as vibrant or flamboyant as some of the other Spanish dances, such as flamenco, but its intricate steps still make it worth watching.

You can hire holidays apartment  Barcelona