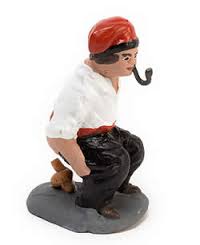 There is a very nice and strange Catalan tradition of setting up in the Nativity scenes,  a special touch: a little guy, somewhere in the picture, squatting with pants down and depositing a healthy looking turd somewhere in the holy scene. He’s called the “el Cagador”—that’s so  “the shitter”….

There are now all kind of faces : the Bush ’s or Obama’s cagador, the Sarkozy and Carla Bruni ’s cagador ….Very strange and funny. On the Christmas market, La Fira de Santa Lucia in front of the cathedral, many shops sell those Cagador, called CAJANER in catalan.
There is also a christmas market in front of the Sagrada Familia.

The caganer is “placed under a bridge, behind a haystack or otherwise discretely hidden” as it “would show a lack of respect” to have him near the arrangement’s manger scene.

The original el caganer is a wooden or clay figure of a peasant wearing the traditional floppy red Catalan cap with a black band (barretina) and smoking a cigarette or a pipe. But the figure’s popularity has led to a massive expansion in the range of defecating figurines.

The Cagador symbolizes the fertility to the earth and the foolish and impolite spirit of the catalan.

The other scatological element of the traditional Catalan Christmas is the Tió de Nadal, which roughly translates as “Christmas log.” Also known as the Caga Tió, or “pooping log,” this character is a 30-centimeter (one-foot) log hallowed out on one end. In recent times, the other end of the log has been given a smiling face, topped with a miniature version of the barretina and propped up on two stick legs. 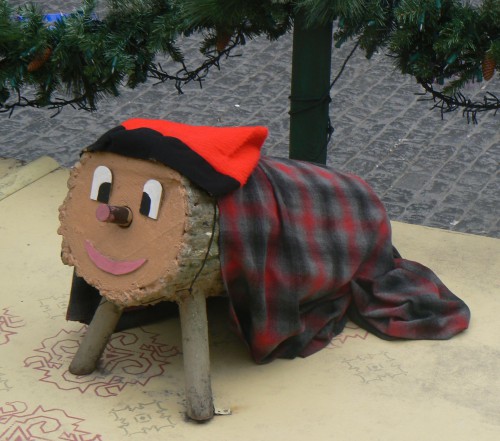 Starting on Dec. 8, which marks the Feast of the Immaculate Conception holiday in the Catholic tradition, the log is “fed” small amounts of candies, nuts, figs or torrons — a local type of nougat — every night and sleeps under a little blanket. On Christmas Eve or Christmas day, depending on the household, one end of the log is put in the fireplace and ordered to “poop.”

To hasten and encourage the log’s symbolic bowel movement, children sing special songs and beat it with sticks, yelling “caga tió!” Someone then reaches around the log and under the blanket to bring forth a gift that is then shared by the group.

Of course, if the revelers are still hungry, then can always go to their local pastry shops, which have sweets shaped like feces on offer during the holiday season.

At Christmas time you can go into the cathedral for free and get to see the Nativity scene inside, next to the goose.

For your stay in the city center, you can hire an apartment in Barcelona to enjoy more space.