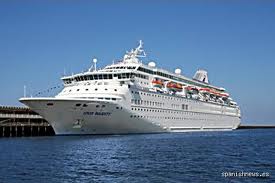 Many different cruises start from Barcelona :

The carnival cruises, has 7-, 9- and 12-day cruises from Barcelona on the new Carnival Magic. It’s the Mediterranean “fun ship.”

the Disney  Mediterranean cruise, depart from Barcelona. The Disney Magic makes 7-, 10- and 11-night cruises from May to September.

Costas has 7-day round-trip cruises from Barcelona. Sail on the Costa Serena to Marseille, Savona, Naples, Catania, and Tunis. Departures from April to November.

On the spanish newspaper ” El Pais” on August 21st :
More than 31000 cruisers arrived yesterday in Barcelona.  But sometimes those tourists do not get out off the boat. They do not visit Barcelona and do not spend any money. A cruiser spend 8 times less money in Barcelona than a normal tourist.
Last year, 2,3 million of passengers stopped in Barcelona. ( 243 % more than 10 years ago).
Barcelona is the first visited city for cruisers  in Europa and the fourth city in the world (after Miami, Everglades and Canaveral).

Many cruisers who spent only a few hours in Barcelona, do come back as they want to enjoy more of Barcelona.