The Argentine’s four-goal, Lionel Messi,will be remembered by many for the qualities of each strike.

Commentators, players and coaches fell over themselves to find new superlatives to describe Messi. “He’s playstation” adding to the list of non-human, extra-planetary descriptions.He emphasised Messi’s human qualities and explaining the reason why he was so popular in the dressing room was because he was so down to earth.

The smiling faces of people leaving the Nou Camp were a testament to that, and even the Arsenal fans we saw in a bar later seemed to appreciate they had seen something special and didn’t appear too downhearted at their side’s exit. 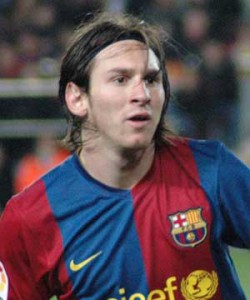 Who is Lionel Messi = The new Maradona

Lionel Messi started playing football at a very early age in his hometown’s Newell’s Old Boys, Argentine. From the age of 11, he suffered from a hormone deficiency and as Lionel’s parents were unable to pay for the treatment in Argentina, they decided to move to Barcelona, Spain. Fortunately for the young player, FC Barcelona, who was already scouting him, learned of his problem and decided to help out and put the life of Leonel Messi back on its rightful track. Messi soon signed with Barcelona’s youth team and moved to Spain for his treatment.

Lionel Messi is the world best football player in 2010.

Barcelona retained the Spanish La Liga title on the final day of the 2009/10 season with a 4-0 win over Valladolid at Camp Nou on Sunday May 16th 2010, finishing ahead of arch rivals Real Madrid.
Pedro forced Valladolid’s Luis Prieto into scoring an own goal after 27 minutes and soon after he doubled the lead from a Lionel Messi pass.

Argentine World Player of the Year Messi wrapped up the victory with a double in the second half, taking his tally for the season to 34.