In case of need, write the emergency phone number  in Barcelona  112 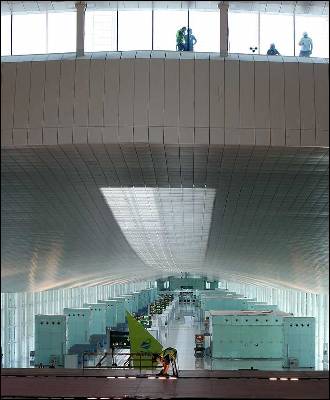 When you arrive at Barcelona Airport El Prat :

To go to Barcelona centre, you can take the following transport:

– A taxi which will cost in between 30 € ,- and 35 €,- to your apartment. On the T1 Terminal, you have to go down to get a taxi. On the T2, taxis are waiting in front of the airport.
The taxi rank is supervised by a taxi marshal and there are plenty of taxis waiting in line.
Regular taxis can take up to 4 passengers, there are larger taxis for 5-6 passengers with a surcharge od 3,10€ – if you need one just ask the taxi marshal and he’ll arrange it for you.
Other common surcharges include 1€ for each suitcase and 3,10€ airport fee.

– The blue airport bus – Aerobus – which depart just in front of both terminals (every 10 minutes, prices 2013  5,90 € or 10,20 € return ticket valid 9 days after purchasing).
Schedule : everyday from 6 am to 1 am ( from the airport to the centre ), from 5.30 am to 3 am from Plaza Catalunya to the airport.
You can buy your ticket from the staff at the bus stops (cash only payments), at the automatic sales machines (payment by credit card) or by paying the bus driver (cash only payments). Encashment change up to 20 €.

It takes around 35 minutes to get to the center of Barcelona (Plaza Catalunya) near the Ramblas.

-After countless delays, the airport metro started its official service on February  12th 2016. The line is L9 Sud (orange line) and it has stations in both terminals called Aeroport T1 and Aeroport T2. Price 4,50 €  You cannot go directly to the Plaza Catalunya, you have to change to another line to get there.

Arriving at Girona Airport in the north of Barcelona (Ryanair , Easy jet, very cheap flights from 30 € + taxes… You can take the bus which drives you to the Northern Bus Station – Estaçió del Norte – near the Arc de Triumph in the centre of Barcelona. It takes about one hour and 5 minutes.

Good Tip : you can  buy the bus ticket to Barcelona outside the airport on your right. The bus is waiting on the right too. At the Northern bus station in Barcelona, taxies are waiting outside the bus station , there is also the metro line 1 ( red line). It takes One hour to get to Barcelona city center.
Bus ticket price : september 2016 : 16 € (one way)  or 25 € ( return).
To buy a ticket for Ryanair airport go at the Northern Bus station : First floor, on the left. Be careful and ask for the schedule of the buses to be sure to be on time for your flight.

Ryanair flights also land in Reus airport , South of Barcelona. There are also buses waiting in front of the airport to drive you to Barcelona centre. 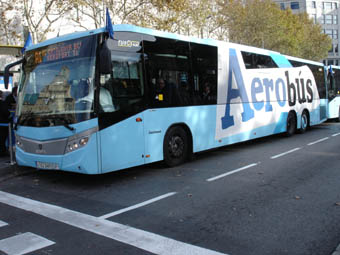 The aerobus from Barcelona airport to city centre.